Organizations continue to develop strategies related to employee engagement, which is the all-important qualifier of discretionary effort widely thought of as the linchpin of organizational success.

Though recognition and work-life balance programs are among the leading methods to promote engagement, both techniques were among the least-valued factors by HR managers when measuring engagement, according to a 2014 Employee Engagement survey by Human Capital Media Advisory Group, the research arm of Talent Management.

Recognition, work-life balance and wellness programs are the top three methods used to promote engagement — formally defined as the extent to which employees are motivated to contribute through discretionary effort. Nearly 61 percent of respondents in this year’s survey said they use recognition as a primary employee engagement tool (Figure 1), followed by work-life balance (54.6 percent) and wellness (50 percent). HR practitioners also reported using stretch assignments and incentive programs to drive engagement, though to a lesser extent.

“Our wellness program has been extremely successful,” wrote one respondent in the comments section of this year’s survey. “Currently, we are sponsoring a weight-loss challenge for our employees.”

Another respondent said: “We use open book management. Employees are educated on how a company makes money, overhead costs and are exposed to the costs of doing business. They get a share of the gains and there are little minigames to help solve problems that prevent efficient running of the company (extra hours on a job or shop time that is not needed).”

But when it came to the values and behaviors companies say they evaluate in measuring engagement, overall job satisfaction (64.1 percent), excitement about one’s work (60.9 percent) and opportunity to grow and improve skills (60.9 percent) top the list, according to the survey, roughly in line with last year’s results.

Additionally, 85.1 percent of survey respondents were aligned in defining employee engagement as “the extent to which employees are motivated to contribute to organizational success and are willing to apply discretionary effort to accomplish tasks important to the achievement of organizational goals.” This is a slight uptick from HCM Advisory Group’s 2013 Employee Engagement survey, when 83.6 percent of survey respondents agreed with that definition.

About 19.5 percent of respondents in this year’s survey said their organization does not evaluate employee engagement, similar to prior year results.

Comments included in the measurement section of the survey reveal that engagement is most often measured through companywide surveys administered at least once a year. Other companies administer engagement surveys every other year. 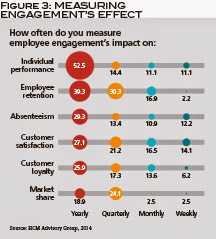 On the other hand, things tied more directly to a firm’s financial results — service quality, profit, revenue and market share — are measured against engagement influence on more of a quarterly basis, according to the survey (Figure 4). A much smaller percentage of HR practitioners reported measuring these things in relation to employee engagement on a weekly basis. 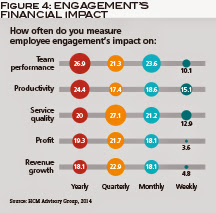