The term “global CEO” has become an oxymoron. While leaders of big companies like to believe they are global in outlook and run by internationally experienced managers, the truth argues otherwise.

Neddy Perez, vice president of global diversity and inclusion for industrial company Ingersoll Rand, disagrees. She said a good CEO in charge of global operations should have worked outside of his or her home country for at least four or five years and had an opportunity to rotate through at least two or three of the company’s major divisions.

Additional data from the Booz study indicated that 2012 accounted for the largest share of planned CEO successions ever studied. Planned successions — as opposed to CEOs who were forced out or lost their jobs because of an acquisition — accounted for 72 percent of turnovers that year. This suggests companies are working more thoughtfully to ensure they put new leaders in place who will best serve the company in years to come, which means there will be ample time to boost diversity efforts.

“To grow global talent and to change the face of the next group of CEOs is going to take a solid commitment within companies to develop a very thoughtful approach to succession planning,” Perez said. “And the critical part will be finding leaders with cultural competency and the ability to drive results.”

The Face of Future CEOs
Neal Goodman, president of Global Dynamics Inc., a training and development firm specializing in globalization and cultural intelligence, is on the fence. He said if he were asked what a good CEO candidate looks like, it would ideally include the prospective candidate having lived overseas.

“If you’ve only seen the world from one perspective, you’re not going to be able to recognize the value of information that’s coming at you from other parts of the world, and you really have to have lived through that, experienced that, to appreciate it,” he said.

On the other hand, he said too often executives go overseas and live in an expat colony. They don’t learn the language, interact with the locals or learn international business. Therefore, not everyone who has lived overseas has developed the cultural dexterity, empathy and appreciation for different cultures. “It’s not a check-the-box,” he said. “A domestic individual might have a better global mindset. It’s about identifying that and nurturing it.” 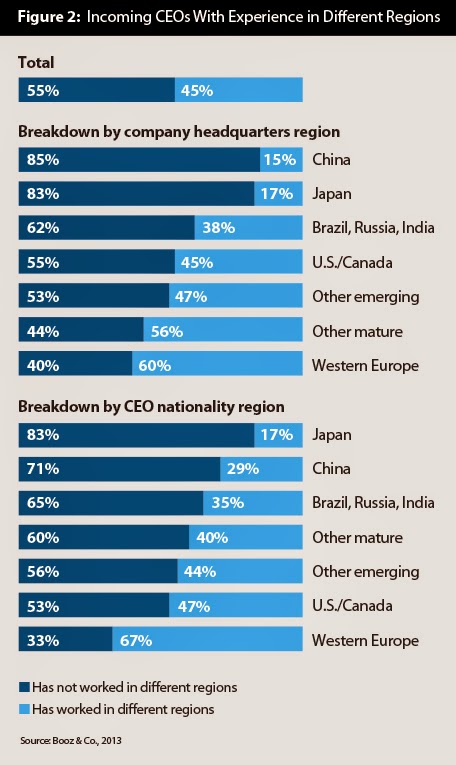 Goodman has worked with PricewaterhouseCoopers on the company’s Genesis Park program, which aims to turn top performers into tomorrow’s global business leaders by helping participants develop the skills and strengths they need to meet the challenges of global leadership. About 150 high-potential PwC senior managers and directors from around the world take part in the 10-month program every year, which places the high potentials in three locations around the world for six weeks. Goodman worked with PwC leaders who were sent to Warsaw, Poland, Singapore and Boston.

Part of the reason the program has been successful is because participants aren’t thrown in to sink or swim.

Goodman said each person is given cross-cultural training, mentoring and introduced to locals to work with on country-specific projects. “People don’t know what they don’t know, but when they’re given the opportunity to be in a new environment and the appropriate cultural training, they can see the world through multiple lenses. They see things and hear things they previously had only seen from a single perspective.”

Time for Action
While no region was a hotbed of diversity in the aforementioned Booz study, Western Europe was the most likely place to find companies with foreign CEOs. Thirty percent of new bosses on the continent were from a country other than the company’s home base, although most of them still came from within the region.

“We’ve been so insular in North America,” said Rohini Anand, senior vice president and global chief diversity officer for Sodexo. “We haven’t had to necessarily reach out and adapt to other parts of the world. That’s changing, and it’s changing rapidly, so we’ve got to change our model of leadership if we are to really leverage global opportunities and want to stay resilient enough to survive.”

Andr?s Tapia, senior partner with consultancy Korn Ferry, said while diversity heads know this, the message often gets lost at the top. He said to change the numbers, diversity executives may have to frighten executives about the risks of not having leaders with a global mindset and cultural dexterity.

Tapia said that while he’s not a proponent of swinging the pendulum and mandating that all executives must have lived elsewhere, he does think it has to become a bigger priority for diversity teams and the executives they serve. “If you are on an executive team that is 90 percent people like you, you’re going to have a hard time gaining skills around cultural dexterity and global mindset. Diversity leaders know the importance of global experience, whether short- or long-term assignments. Global companies have projects they can have employees from multiple countries work on together. It’s a matter of making it a priority to change the face of leadership for the future.”

Ladan Nikravan is a senior editor at Diversity Executive. She can be reached at editor@diversity-executive.com