Whether to apply quotas to redress gender imbalance is one of the most debated diversity topics. According to data from the 2013 study “Women in the Boardroom: A Global Perspective,” its proponents identify Norway as a bellwether.

Thanks to quotas, Norway is leading globally with 40 percent of women on the boards of the largest listed companies. However, quota opponents suggest their use may result in female appointments not based on merit, again citing Norway, which has in some cases resorted to importing female directors from elsewhere in Scandinavia to meet legislative demands.

If quotas were the answer for every country, gender imbalance would already be a subject of the past. Other countries have taken the quotas route with little change to date. For instance, Italy is hovering around the 6 percent mark for female board directors with little change against previous years even though quotas became effective in August 2011, notwithstanding the threats of fines for noncompliance.

The Role of the Regulator
Deloitte research shows percentages of women on boards have increased significantly for some countries spurred by the increase of women on boards of state-owned companies. In these countries, the catalyst for change has been governments imposing quotas on female appointments for state-controlled companies with the hope that the private sector would follow suit either without quotas, or the quota would be extended to the private sector after a period of time.

For instance, in Malaysia, a government policy introduced in 2004 for civil services resulted in the number of women working in government agencies increasing from 18.8 percent that year to 32.2 percent in 2012. Meanwhile, in the corporate sector, women’s representation on boards has increased from 6 percent in 2011 to 10 percent in 2012 due to quotas.

For some countries — Australia, Denmark, Finland, Germany, Japan and the U.S. — implementing targets or recommendations seems to resonate more than introducing quotas, as they can lead to more far-reaching change. Australia avoided quotas yet achieved 17.3 percent female representation on a sample of the Australian Securities Exchange 100 and 15.4 percent of the entire Australian Securities Exchange 200, with a pace of change second only to France, which has implemented quotas. In Australia, companies are held accountable by disclosure requirements that came into effect in January 2011.

Companies listed on the Australian Securities Exchange are required to:

• Establish measurable objectives to achieve gender diversity and assess annually both the objectives and progress toward achieving them.

• Disclose in each annual report the measurable objectives to achieve gender diversity and progress toward achieving them.

• Disclose in each annual report the proportion of female employees in the whole organization, in senior executive positions and on the board.

• Disclose the mix of skills and diversity the board is looking to achieve among members.
While compliance with the recommendations is not mandatory, companies that choose not to comply must provide an explanation in each annual report as to why.

Germany requires a similar level of disclosure in annual reports, and in the United Kingdom from periods on or after Oct. 1, 2012, there will be specific disclosure requirements in the annual report on a company’s diversity policy and its implementation.

Figure 1 indicates the effect of recommendations in the growing percentage of all new appointments of women in Australia. This effect was visible even before recommendations came into force, indicating corporations may change their behavior in anticipation of regulatory changes. 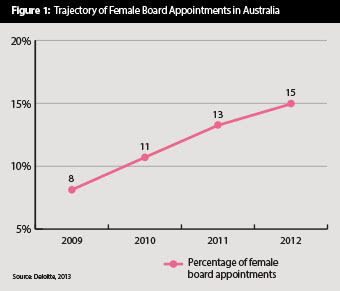 Countries that require disclosure on diversity in the annual report may have found the lever to amplify the effect of a target or recommendation, with consequences indistinguishable from quotas. Others argue this is only achieved through public awareness.

Stakeholder Activism and Public Pressure
Among the countries successfully crafting change through quotas or targets and recommendations, in many cases stakeholder activism and public pressure played a critical role in inspiring legal and regulatory change, and then demanding acceptance from companies.

Countries with established and active shareholder groups, not to mention an active and free business press, can often use disclosure requirements from recommendations and targets for enforcement, as companies based in these countries expect to be challenged publicly on their records. On the other hand, quotas with no sanctions in societies with less organized stakeholder activism may struggle to generate change.

Research shows that Norway is the only country that has managed to pierce the 40 percent barrier. It has achieved this by implementing quotas and inspiring public debate. Whether other countries can follow suit — countries that are opposed to quotas or where quotas are not as effective at increasing percentages of women on boards — remains to be seen.

The Deloitte study highlights a lack of shareholder involvement in the debate, with the exception of New Zealand, where the New Zealand Shareholders’ Association made gender diversity a priority in mid-2010. Yet the percentage of women on boards in New Zealand is low, showing there is still more work to be done there. For many countries, the question remains why haven’t shareholders — who, as owners of companies have the power to create this change — pressed the issue as forcefully as governments and regulators?

The global lack of women on boards may preface a deeper issue. The majority of board seats in most jurisdictions is held by current or retired executives, typically from other companies. For women to be appointed to boards, they must first be appointed to executive leadership positions in companies. There have been no significant increases in the number of female executive directors, and the pipeline of women coming into executive positions is part of the reason why.

This may represent one of the more cruel ironies of the boardroom diversity debate: companies have become eager to check the box for gender diversity by appointing women to nonexecutive roles, while men retain the majority of executive and executive board appointments. Companies insist they have a duty to shareholders to return profits, and if women do not have the necessary experience, it is difficult to place them in executive roles. Changing these attitudes may require companies to implement a pipeline policy that would give women the necessary experience to secure parity in senior executive roles. Or, like the boardroom debate, the issue may require its own discussion by shareholders and other stakeholders.

What Can Women Do?
While regulators, policy makers and the public have demanded change, and while shareholders may become more active, women likely should — as Facebook COO Sheryl Sandberg suggests in her book “Lean In” — take full advantage of career opportunities to successfully translate these changes into director roles.

Further, the sponsor’s role in promoting change cannot be underestimated. A sponsor is important to provide support for career progression rather than advice, someone who is a powerful advocate in the workplace. In “Lean In,” Sandberg credits her male sponsors for opening doors of opportunity to her.

There are also other approaches to the boardroom diversity debate. In South Africa, the debate over female nonexecutives has heightened the cause for women within the broader context of diversity in all forms, including race, cultural background, experience and diversity of thought.

The South African experience recognizes that, in an increasingly global world, companies that do well avoid groupthink when solving problems. Directors from myriad traditions and influences could play a critical role in bringing a fresh perspective to the table.

Countries follow several routes shaped by their cultural and philosophical narratives in an attempt to gain gender parity on corporate boards. There is no one-size-fits-all approach and no magic formula for boardroom diversity. Stakeholders should consider identifying solutions that match their countries best. Where progress stalls, shareholders can lend their voices as owners of the company, and women can seek out and embrace new career opportunities.

Tracy Gordon is a director, and Georgia Wilson is a manager in Deloitte UK’s Centre for Corporate Governance team. Deloitte is a global audit, tax, consulting and financial advisory services firm. They can be reached at editor@diversity-executive.com.