June marked the 50th anniversary of the Equal Pay Act, signed into law June 10, 1963, to address the gender wage gap and to enforce equal pay for equal work. With women only beginning to enter the labor force in significant numbers, it was a landmark piece of legislation. At the time, women earned 59 cents for every dollar earned by men, according to the U.S. Census Bureau.

While the gap is smaller today — 81 cents to the dollar, according to the Bureau of Labor Statistics, or BLS — the issue remains a perennial topic of contention and has taken on new significance now that women are the family breadwinners in four out of 10 households, according to a 2013 analysis by the Pew Research Center.

Many explanations of the pay gap remain focused on the prevalence of workplace discrimination and the role life choices play in the wage gap. BLS data shows that women are still more likely than men to take a temporary or permanent career leave to raise children, and perhaps as a result, are less likely to pursue higher-paying leadership positions or jobs that demand longer hours or extensive travel.

A 2013 CareerBuilder and Harris Interactive pay gap survey (Editor’s note: the author works for CareerBuilder) found that male workers are more likely to aspire to a senior leadership role by a 28 to 16 percent margin. Further, BLS research shows that at the beginning of one’s career, men’s and women’s pay is almost equal. Only over time do men pull away, leading many leaders in the business community to call for greater career and workplace flexibility for working, career-driven mothers. If women aren’t reaching leadership positions despite their willingness and potential, companies must ensure that training and development opportunities are gender neutral.

Both of these factors — discrimination and life choices — play some role in the wage gap. However, a related, lesser-discussed life choice is also a dominant driver — that women are less likely to enter many of the job market’s best-paying fields, a trend often referred to as occupational segregation.

The 2013 CareerBuilder pay gap study, which used labor market data from Economic Modeling Specialists International, or EMSI, explored how gender differences by occupation might affect the wage gap. EMSI’s proprietary data is based on the BLS Quarterly Census of Employment and Wages and includes data of workers who identified as self-employed on census surveys.

Common Occupations for Women Pay Less
Occupational choice as a factor in the wage gap shows up prominently when examining the most common jobs men and women hold. Figure 1 is a side-by-side look at the 20 largest occupations for both genders. Only six occupations appear on both lists, providing a picture of how men and women are segregated into different job types. Women are still far more likely to gravitate toward functions such as office clerks, housekeeping, child care and direct care. On the other hand, the most common jobs for men often involve hard labor.

There is nearly a $3 difference in median hourly pay between the 20 largest occupations for women and the 20 largest occupations for men. Economists and academics argue whether this gap exists because historically female-dominated jobs always have been underpaid and have never caught up in spite of efforts to reduce discrimination, or if it exists because many male-dominated jobs warrant higher pay due to inherent occupational risks. There’s likely some truth to both sides. Rather than figuring out how to narrow the gap at the low end of the wage scale, it is best to explore where women can make bigger gains in high-paying, male-dominated jobs.

The CareerBuilder analysis found that women are the majority jobholders in 19 of the 100 highest paying occupations as measured by median hourly earnings. Men dominate the top 20 occupations, which include lucrative medical jobs such as OB/GYNs, general practitioners, surgeons and internists, as well as positions in engineering and computer and information systems. In businesses, women make up less than a quarter of the nation’s more than 300,000 chief executives.

But should this be the case in 81 of the 100 best-paying occupations? The ratio appears disproportionate when juxtaposed with the 100 lowest-paying jobs, where women are the majority jobholders 47 percent of the time, according to EMSI data.

Figure 2 displays jobs where women are the majority jobholders. These occupations run the gamut of industries and job types. From communications and administration to research science, pharmacy and therapy, women can be a driving force in occupations in science, technology, engineering and math, known as STEM, and business services. 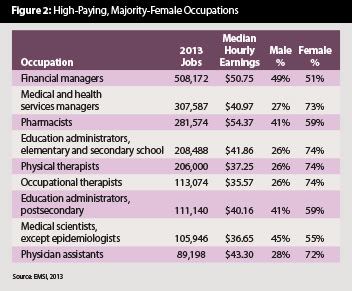 Yet examples of highly paid, female-dominant jobs are few and far between. This is illustrated by exploring the highest-paying jobs where women hold the majority stake. In this analysis, a margin of 20 percentage points between men and women is used as a marker for occupational dominance. In other words, these occupations are at least 60 percent female. A few of the top examples in this category are industrial-organizational psychologists ($48.53 per hour), public relations/fundraising managers ($44.86 per hour), compensation/benefits managers ($44.23 per hour), training and development managers ($43.93 per hour) and physician assistants ($43.30 per hour). In all, there are 22 female-dominant occupations that pay more than $30 per hour.

Besides those seen in Figure 2, other jobs in this category include dental hygienists, radiation therapists and registered nurses.

However, compared to men, women do not fare as well. There are 82 male-dominated jobs that pay above the $30 per hour benchmark, including common white-collar jobs such as lawyers (65 percent male), sales managers (62 percent male), and general and operations managers (72 percent male). Almost the entirety of the remaining male-dominant, high-paying occupations share one common trait: they require proficiency in a STEM skill set.

A Move Toward STEM
If diversity advocates are serious about closing the remaining gender wage gap, two things must happen. First, more women must be encouraged to enter STEM fields. Second, organizations must make a concerted effort to hire, develop and retain young female professionals in traditionally male-dominant occupations.

To the first point, consider engineering, an occupational group that consists of many of the labor market’s most skilled and hard-to-find workers. It may be a tough sell to encourage women to enter work environments that are almost exclusively male such as petroleum engineering (89 percent male, paying $58.77 per hour), but it is not out of the question. Further, there are several other engineering disciplines just as lucrative and conducive to a balanced, rewarding career. Chemical, biomedical, environmental and computer engineering are all fields that pay well and can benefit from increased gender diversity.

There are also several medical disciplines dominated by men that could be brought into balance. Consider family or general practitioners as an example. More than 70 percent of physician assistants are women, while 60 percent of general physicians are men. It is difficult to determine whether there are reasons for this other than decades of occupational type casting.

The same can be said for jobs in information technology. Computer and mathematical occupations have consistently been among the highest growth areas in BLS monthly job reports post-recession and are expected to grow nearly 20 percent during the next decade, according to EMSI projections.

The solution to the gender occupation gap for many of the United States’ highest-paying jobs must originate in the education system. From a sociological perspective, the gender division of career options likely begins at a young age. Educators, as well as parents, must avoid all notions of characterizing STEM as male-only territory, and schools should promote STEM disciplines early and often.

Despite the fact that women account for 57 percent of all currently enrolled college students, according to the U.S. Census Bureau, female graduation trends for major STEM programs, as well as other popular career training-focused majors, have worsened in the past decade.

Figure 3 shows the percentage of females as a share of all graduates for the listed bachelor’s-level programs. The share of female graduates in every field shown has declined since 2003, including a significant dip in engineering technology and computer science. While general engineering studies remained relatively flat, only one in five graduates is female. The one exception, medicine, is an encouraging sign. During the recession years, the number of women graduating medical school nearly pulled even with men. Today, the rate is 48 percent — three percentage points higher than 2003.

Secondly, once women are in these fields, diversity executives must ensure the workplace environment accommodates professionals unwilling to sacrifice career for family. Advocating flexible schedules, promoting child care benefits, and ensuring fair and equitable promotion and career advancement opportunities for women are all tactics that can close the pay gap. Such initiatives are likely to create a more satisfied, dynamic and productive workforce in general.

For decades, the gender wage gap has been a symbol of the fight for women’s equality in the workplace. While efforts to weed out discriminatory practices have improved in the past decades, the occupation variable in the gender gap equation remains unsolved. Moving forward, a greater push to train, educate and hire more women in the highest-paying fields is ultimately the next step toward moving 81 cents for every dollar closer to a dollar for every dollar.

Rosemary Haefner is vice president of human resources for CareerBuilder. She can be reached at editor@diversity-executive.com.