The weak labor market associated with the economic downturn has led many U.S. companies to experience lower turnover rates. In recent years employees sat tight and waited out the storm. As economic conditions improve, however, many of these same employees are likely to begin evaluating new opportunities.

A 2012 analysis of management consulting firm Hay Group’s global employee opinion database, which includes opinions from nearly 1.7 million U.S. employees working in 152 organizations, found that nearly two in every five employees (38 percent) planned to leave their employers within the next five years. Considering the significant impact turnover can have on organizational performance, talent managers who don’t address this potential employee exodus head-on may find themselves without the high-performing talent crucial to their company’s long-term success.

To evaluate the turnover challenges organizations face, the author’s firm, management consulting firm Hay Group, conducted a study of turnover trends and statistics, which were published in two reports: its 2012 General Market Compensation Survey and 2012 Retail Industry Turnover Survey. Both reports evaluated trends and annual changes in turnover as well as actions and tactics organizations are taking to retain key talent.

During the last year, concerns about increasing turnover rates have been particularly pronounced among retailers that are already experiencing pressure. A broader look at turnover in general as compared to the retail industry shows that turnover is a bigger issue among retail organizations. On average, general industry voluntary turnover for corporate positions is less than three quarters that of the retail industry (Figure 1). However, this is not alarming, because turnover in retail always has been high compared to other industries.

According to Craig Rowley, global practice leader for retail with Hay Group, prior to the 2008 economic downturn, turnover for retail hourly associates trended at about 90 percent and was as high as 150 percent in some companies. Essentially, some retailers were forced to replace their entire employee population up to one and a half times within a year.

While turnover rates dropped by half during the recession, turnover has started to pick up recently because companies are hiring again as the economy recovers. As retailers experience improved sales, they are hiring permanent employees to fully staff their stores, which creates a challenge for HR leaders — particularly those who have not focused on retaining key talent. According to the retail turnover survey, more than half of companies report that turnover is approaching pre-recession levels, and companies are more focused on retention and engagement strategies than at any time in the recent past.

Turnover in Retail: Distribution Centers, Stores and Corporate Entities
With the recession in 2008, store-level voluntary turnover decreased from 90 percent to close to 50 percent, according to the retail turnover survey. Retailers curtailed hiring as sales dropped, leaving employees less willing to quit their jobs.

This brief decrease in store-level turnover is ending. More than 80 percent of retailers surveyed anticipate the highest concentration of turnover moving forward to be among hourly store employees. The biggest increase in turnover rates from 2011 to 2012 was in the store-level, non-exempt, part-time employees: it rose from 50.5 percent in 2011 to 63.6 percent in 2012.

Turnover also impacts corporate positions. An analysis of 2011 and 2012 corporate retail turnover indicates turnover rates have remained largely unchanged, with an annual turnover rate for most functions at median levels of 5 to 10 percent. The exception is in e-commerce operations, where 2012 turnover rates were nearly two times those of 2011 levels, 10 percent in 2011 compared to 17.7 percent in 2012. This is not surprising, as improving e-commerce presence and sales is a priority for almost every retailer. Demand for this talent is high, and supply of experienced talent is low.

The impact of the growth in e-commerce has far-reaching consequences as well. Not only do retailers need to be concerned about hiring and retaining technical talent to support e-commerce, they need talent for merchandising, supply chain and marketing, and customer connections to manage this rapidly growing business segment. Further, growth in e-commerce and mobile channels exacerbates the challenge of retaining employees because retailers aren’t only fighting for talent in their industry; they have technology companies to contend with, all looking for the same talents and capabilities. Technology companies represent a fierce competitor for retail — many offering free meals, onsite sports and recreation, and other perks to lure top talent.

This is important, because a 2012 Hay Group study called Retention of Key Talent and the Role of Rewards found that not only does turnover create increased demands for companies and the employees who are left to pick up more work, there are costs associated with employees leaving the company. Hay Group estimates suggest the combined hard and soft costs of employee turnover range from 50 to 200 percent or more of the employee’s annual base salary. Factors that influence this range include level and complexity of the position as well as whether the employee was hourly or salaried.

Turnover’s hard costs are incurred through recruiting advertisements, searches, application, screening and onboarding processes. Examples of soft costs include supervisors taking time to interview candidates, staff members training new employees, mistakes made by overloaded or new employees and lost productivity or business opportunities. Since these numbers are hard to quantify by position and across the company, it is not surprising that 96 percent of companies surveyed state they do not capture or calculate the cost of turnover.

Strategies to Combat Turnover
Rising turnover is not solely a result of improving economic conductions. Workplace dissatisfaction is also on the rise — a result of employees working harder because of workforce downsizing, expansion of job responsibilities, constrained pay increases and incentive payouts, fewer advancement opportunities and heightened pressure to perform. To understand how to retain employees, it is important to first understand why they exit.

The primary reason employees exit their jobs in the retail sector is to pursue better career opportunities, which was cited by 74.1 percent of companies (Figure 2). Therefore, it’s critical that talent managers in the retail sector focus on training and career pathing to lower turnover. The second most prevalent reason for exit, cited by 44.4 percent of companies, was for more money, followed by geographic change or desirability, which was reported by 7.4 percent of companies. Another 13 percent selected “other” as the primary reason for leaving, which includes issues such as work-life balance. On a part-time hourly level, reasons for turnover included not obtaining desired shifts, irregular scheduling, location of store, amount of take-home pay and the nature of work. 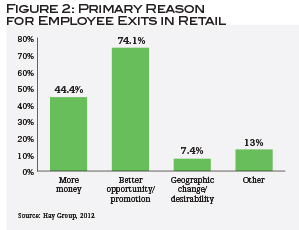 In addition to the historical reasons for turnover, talent retention has become exponentially more difficult for companies due to advancement in technology and social networks. With the click of a button, employees are able to quickly and easily promote their capabilities and accomplishments through social media outlets such as LinkedIn, as well as compare pay packages across organizations on websites such as Glassdoor.com and Salary.com. 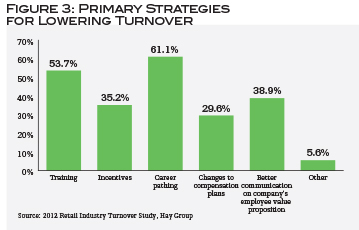 Generally, employees have greater longevity with an organization if they are satisfied with their professional growth and potential opportunities. While compensation levels should be competitive, compensation is a hygiene factor and not a differentiator. The key to managing turnover lies in defining and communicating career paths that provide employees with opportunities for development and advancement.

Although turnover always will be an issue in the retail industry, employers are mitigating turnover by using tools spanning the HR spectrum. Such processes include assessment tools for better talent selection, developing and communicating career progression opportunities, focusing on talent engagement, and at the store level, applying systems to give employees more predictable schedules in advance, training high-potential employees and reviewing pay practices to ensure competitive compensation levels. With the economy strengthening and the job market improving, retailers are going to see turnover increase. The companies that use multiple tools to aid retention will be well positioned to retain their talent.

Jennifer McPhee is a senior analyst, and Maryam Morse is a senior principal and national retail reward practice leader at management consulting firm Hay Group. They can be reached at editor@talentmgt.com.