A March 18 national ABC News poll showed 58 percent of the American public supports the right of same-sex couples to marry. Former Secretary of State Hillary Clinton declared her support for marriage equality on March 1. Sen. Rob Portman of Ohio became the first sitting Republican senator to support marriage for all on March 15.

The Supreme Court is hearing cases that could repeal the Defense of Marriage Act and make marriage equality a federal mandate. This past January, President Obama included lesbian, gay, bisexual and transgender Americans in his second inaugural speech. He incorporated a call for LGBT equality, saying, “Our journey is not complete until our gay brothers and sisters are treated like anyone else under the law,” and an openly gay man, Richard Blanco, delivered the inaugural poem.

Obama, Clinton and Portman recognize that a rapidly changing American electorate demands an ongoing shift in political strategies. Whether as candidates or as elected officials, leaders cannot afford to marginalize, let alone ignore, the gay constituency. The LGBT community may account for a small percentage of overall voters, but it is a population with considerable and growing clout in elections and in the workplace.

Private Sector Leads Progress
Research by nonprofit think tank the Center for Talent Innovation (CTI) details why creating this environment is so crucial for businesses. “The Power of Out 2.0,” a report released in February, demonstrates that business leaders who embrace LGBT talent reap bottom-line benefits. As in CTI’s first study in 2011, findings indicate that companies encouraging employees to bring their whole selves to work hold an advantage in recruiting, realizing and retaining the full potential of top talent. Out LGBT employees perform better, are more engaged at work and are more likely to be satisfied with their career progression than their closeted counterparts.

While public opinion has rapidly shifted toward support for full LGBT equality, and Obama’s re-election and LGBT-friendly policies have paved the way for progress, there is still work to be done. As private sector companies have realized, it’s not just about public policy.

Many CEOs are also publicly voicing support, whether speaking at leadership summits such as Out on the Street, where for the first time last year on May 2 four CEOs — Goldman Sachs’ Lloyd Blankfein, KPMG’s John Veihmeyer, Bank of America’s Brian Moynihan, and Elliott Capital Management’s Paul Singer — spoke together in support of LGBT inclusion. Now, many are looking beyond policy toward broader cultural change. They are focusing on creating an environment where every employee can bring his or her full self to work.

As consumers as well as employees, LGBT professionals are worth wooing. According to Witeck Communications, LGBT individuals have an estimated $790 billion buying power. Further, protecting this pro-LGBT image has been shown to be a net positive for companies — consider the groundswell of support for JCPenney when executives stuck by their choice of Ellen DeGeneres as spokesperson.

What Can Companies Do?
The first step for any employer is to ensure its workplace culture is inclusive and supportive of LGBT employees. While there has been progress on this front — CTI’s first survey in 2011 showed 48 percent of LGBT workers in the closet — the current survey of college-educated LGBT Americans in white collar professions shows 41 percent of LGBT workers are still in the closet (Figure 1). The sample size for transgender employees was statistically insignificant. 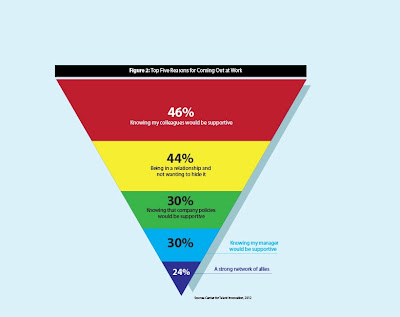 LGBT employees are also more than twice as likely to be out at companies where straight senior executives express their support publicly — 47 percent versus 21 percent.

CTI data also shows that company policies and benefits are top-of-mind for LGBT talent in the marketplace. More than three-quarters of LGBT job seekers (77 percent) consider a company’s LGBT benefits an important consideration; 70 percent look at a company’s reputation in the LGBT community when seeking or accepting employment (Figure 3). 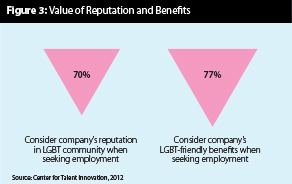 Adoption assistance, parental leave for both partners, bereavement leave and transgender-specific medical coverage, as well as “grossing up” pay to offset imputed income tax are just some of the ways companies are looking beyond the standard domestic-partner health insurance benefits to ensure an inclusive workplace.

Benefits alone will not make the difference. Company culture is a key block with which to build an inclusive culture. A large part of that culture is shaped by employees who are straight allies. Support for LGBT individuals in the workplace is growing: some 83 percent of women and 70 percent of men in the survey consider themselves LGBT allies. There is work to be done, however. When allies were asked what LGBT-supportive actions they had taken to be an ally, such as speaking up for a colleague at work or attending events in support of LGBT colleagues, only 19 percent of women and 8 percent of men had done these (Figure 4). This suggests ally programs should provide more opportunities for allies to make the transition from statement to action. 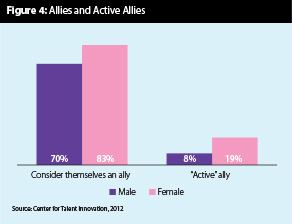 Obama is one of these active allies. His dedication to LGBT rights — regularly hosting Pride events in the White House, appointing LGBT staff, implementing the repeal of “don’t ask, don’t tell,” adding gender identity to the nondiscrimination policies for all federal jobs, signing an LGBT-inclusive hate crimes bill and becoming the first president to support same-sex marriage — distinguishes him as a chief executive who understands the benefits of an inclusive culture.

However, in 29 states, employees can legally be fired simply for being gay, lesbian or bisexual; in 34 states, they can legally be fired for being transgender. This is often a surprise to many employers, in a time when 87 percent of Fortune 500 companies prohibit discrimination on the basis of sexual orientation.

As “The Power of Out 2.0” shows, discrimination remains a hurdle for many LGBT professionals. America’s employers can continue their progressive work and lead the public sector in this effort. Diversity leaders at forward-thinking companies can lead the charge to help their HR peers expand beyond domestic-partner health insurance benefits to offer adoption assistance, parental leave for both partners, bereavement leave and transgender-specific medical coverage.

Communication efforts to share benefits with audiences internally and externally likely will require using a variety of media to disseminate information. This includes recrafting corporate missives with inclusive language and conducting LGBT-specific education and diversity training.

LGBT-friendly companies are also deliberate in leveraging the power of allies. Senior-level straight allies will be actively involved in LGBT resource groups, acting as a voice for LGBT employees. Talent professionals are key communicators who fully engage their C-suite members in support of LGBT equality as well as inclusion, sending a message from the top that discrimination on the basis of sexual orientation or gender identity is not a part of the company culture and will not be tolerated.