The United States is rapidly becoming a majority-minority country. According to the U.S. Census Bureau, in the last decade the Hispanic- and Asian-American populations each swelled 43 percent, while the number of African-Americans rose 12 percent. Minorities now make up more than a third of the nation’s 300 million people, and an era of vibrant diversity is rewriting culture, schools, history and workplaces.

But the people who are America’s future are underrepresented in the highest corridors of power. According to the Alliance for Board Diversity, minorities hold fewer than 10 percent of board seats at Fortune 500 companies. Despite the first African-American occupying the Oval Office, only six blacks, seven Latinos and seven Asians hold Fortune 500 chief executive positions — 3.8 percent. People of color wield a total of $2.5 trillion in buying power, according to University of Georgia economist Jeffrey Humphreys, yet their representatives at the top of the economy could fit in a corporate jet.

It’s not that talented people of color lack the qualifications or drive, according to “Vaulting the Color Bar,” a 2012 report from the Center for Talent Innovation (CTI), a New York think tank. The study, based on a survey of nearly 4,000 college-educated U.S. men and women, finds that multicultural employees are highly ambitious.

Yet the fact that qualified people of color languish in middle management or stall in the talent-studded layer of senior management just below the C-suite is so common that 21 percent of Hispanics, 29 percent of Asian-Americans and 35 percent of African-Americans agree with the statement, “A person of color would never get a top position in my company.” In contrast, 10 percent of Caucasians agree. The barrier is not an issue of credentials, ambition or performance. Instead, it’s a question of sponsorship — or the lack of it.

The Search for Sponsorship
Like elite mountain climbers ascending high peaks without oxygen, talented multicultural professionals struggle to attain the C-suite without crucial backing — though they may need such aid more than their white peers. “There appears to be a level of acceptance that they cannot achieve even when they hold the necessary credentials and occupy powerful positions,” said researcher Gail McGuire, chairman of the department of sociology and anthropology at Indiana University South Bend.

Multicultural men and women face a different and more hostile climate at the top of the corporate world. “They are missing the relationships and the assignment to get them the visibility they need,” said Ella Bell, associate professor at Dartmouth’s Tuck School of Business and author of Career GPS.

They need advocacy tailored to their needs: not mentors but sponsors. What is the difference? Mentoring involves little commitment or risk, and lacks accountability. In classic forms of mentoring, a more experienced person acts as a role model and close adviser to a mentee. Done well, the relationship can bolster career progression and satisfaction for mentees, while boosting creativity, internal recognition and feelings of fulfillment for mentors.

Still, mentoring does not offer the kind of front-and-center leverage sponsorship provides. Like mentors, sponsors inspire their proteges and offer road-tested savvy advice. But they do more: They elevate a protege’s visibility within the corridors of power, win him or her key assignments and promotions, and place their own reputations on the line for a protege’s continued advancement.

In short, mentors see associates to the threshold of power; sponsors pull them through.

Sponsorship is particularly crucial for people of color because a high profile is often what they lack at work. Despite an abundance of drive and ambition, CTI research finds that African-Americans, Asians and Hispanics are less likely than whites to report that they have a personal connection to more than five senior managers at their company. As well, nearly a fifth of African-Americans and 15 percent of Asians say that no senior managers know them by name. “I was taught that all you have to do is perform and success will follow,” said one African-American Harvard MBA. But he learned the hard way that “to get to the exclusive level requires as much relationship-building as performance.” For people of color, invisibility is a crucial impediment to power: They often just aren’t known and so aren’t valued by the people who matter.

It’s not that people of color aren’t networking. Most are avidly cultivating mentors and role models across race lines and within their own ethnicity. People of color tend to cultivate two complementary networks: “One set of relations with whites who may provide access to resources and opportunities, and another set of relationships with people of color who provide psychosocial and emotional support,” said David Thomas, Audrey Murrell and Stacey Blake-Beard in a paper titled “Unfinished Business: The Impact of Race on Understanding Mentoring Relationships.”

The problem is that minority networking efforts too often are tailored to mentoring, rather than sponsorship. Consequently, while people of color who are qualified to lead may have someone behind them offering sympathy and guidance, they don’t have someone out front, breaking the path for them: They lack the powerful advocates they need to propel, inspire and protect them. Only 8 percent of people of color — an average composed of 9 percent of African-Americans, 8 percent of Asians and 5 percent of Hispanics — have a sponsor, compared to 13 percent of Caucasians (Figure 2). Caucasians are 63 percent more likely to have a sponsor than people of color. 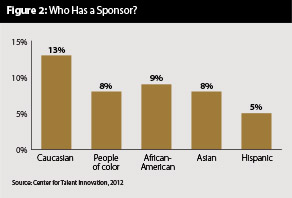 Breaking the Barrier to Trust and Acceptance
While the obvious effects of sponsorship include opening doors and making connections, sponsors perform a less obvious but equally valuable service for multicultural proteges. Sponsorship sweeps aside the stereotypes that multicultural professionals face — the “angry black,” the “emotional Latina,” the “docile Asian” — that place them at the extreme edges of acceptability.

People of color often feel they have to hide their true selves at work, according to CTI research. More than 37 percent of African-Americans and Hispanics and 45 percent of Asians, for instance, say they “need to compromise their authenticity” to conform to their company’s standards of demeanor or style (Figure 3). Forty percent of African-Americans — and a third of people of color overall — feel like outsiders in their corporate culture, compared with 26 percent of Caucasians. 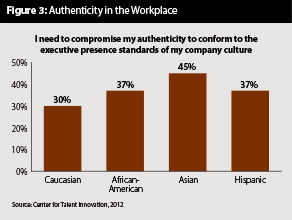 Fewer than a third of Asian-Americans feel very comfortable being themselves at work. An Indian vice president at a multinational pharmaceutical firm recounts being told by her boss that her Anglo-Indian accent was “too stuffy.” She, like others interviewed in CTI studies, avoids referring to Hindu holidays, discussing cultural mores with co-workers or wearing anything that might be perceived as too ethnic. “You lead a dual life, you absolutely do,” said another Indian senior manager. “There is an inhibition. You just don’t want to talk about it. And I’d never dream of wearing a sari to work.”

African-American men and women struggle with the conundrum of how to be assertive without courting the historic stereotype of the angry black. “My style is direct,” said one senior executive cited in the CTI report. “In the back of your mind, you wonder and worry whether you’re perceived as being demanding and confrontational.”

Overall, people of color are more likely than whites to feel they need to compromise their authenticity at work to conform to conventional standards of executive presence. “You’re like a chameleon, constantly changing the way you are,” said an African-American network TV manager.

When people of color feel they have to mask a rich cultural heritage or other aspects of difference, CTI research shows they are apt to feel isolated at work, and mistrustful of and less loyal to employers. That, in turn, leads to disengagement and a greater likelihood of leaving.

Sponsorship can turn the uncertainties and insecurities of difference into the confidence and vision of career success. According to CTI data, with sponsorship, proteges of color are 65 percent more likely than those without a sponsor to be satisfied with their rate of advancement. Having an advocate in the workplace enables them to feel more comfortable being themselves and doing their best work.

Knowing that someone has their back dampens the distrust and discomfort that ultimately leads to a multicultural brain drain. As a result, proteges are nearly 60 percent less likely to plan to quit within a year (Figure 4). 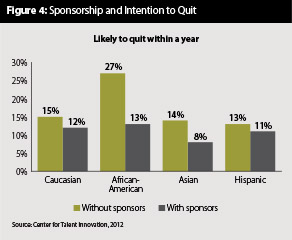 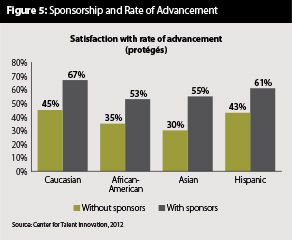 Anand Kini should know. Kini had been handling financial planning at Comcast Cable and was looking to broaden his expertise. His sponsor, Comcast’s vice chairman and chief financial officer, encouraged him to apply for the position of senior vice president of strategic planning and development at Comcast’s sister company, NBCUniversal. Kini, the son of immigrant Indian-Americans, had a broad background but was a traditional finance executive in the cable industry, and the position he sought was in a high-profile department that heavily valued media experience. However, he had a strong advocate.

“My sponsor vouched for my capability. But more importantly, he helped me get set up so that I could succeed. Basically, I had some credibility coming in, which then enabled me to let my work speak for itself.” Kini got the job. Sponsors, Kini said, “can help make things happen for you.”