The last four years have been a roller coaster ride for businesses. Picture the thrill of being in the first car as it lazily creeps over the crest of the initial big drop. Eyes grow wider as the car inches over the top and the drop becomes steeper and steeper, until finally one can see all of the tracks as the car plummets rapidly. That’s an accurate description of the free fall the economy took in the latter part of 2008 and into 2009. For experienced riders, part of the fun of feeling the weightlessness is the near immediate reversal as the car reaches the bottom and climbs back as steeply as it fell, g-forces compressing the body like an orange in a juicer.

Here, unfortunately, is where the analogy diverges. The economy has not roared back to life, as has been the case with previous recessions. It’s been more like the end of a bobsled run where the track flattens out, then slowly inclines upward. While few would argue against the idea that a modest incline is better than a continued decline, this is one hill where a steep grade would be welcome.

While all organizations are hoping for a speedy recovery, the sluggish economy does afford them the opportunity to prepare for better times ahead. For compensation professionals, now is the time to perform a check-up on their compensation programs. One gauge of program health is to compare oneself against the practices of other companies. In 2012, WorldatWork published the results of its Compensation Programs and Practices survey from more than 1,000 organizations of all sizes and representing a variety of industries.

Compensation programs are almost as varied and diverse as the people who might visit a doctor’s office on a given day. However, that doesn’t mean there aren’t common questions and tests that can be applied to everyone. Following are six questions to help compensation professionals assess their reward programs.

Do you have a defined compensation philosophy? A compensation philosophy is a written or unwritten statement or belief about how the organization intends to reward its employees. It typically includes such things as the desired positioning of pay levels relative to market, how the organization evaluates its jobs, what behaviors to reward and the mix of rewards — base pay, variable pay, benefits and work-life offerings. WorldatWork survey results show that 93 percent of organizations have a compensation philosophy and, compared to 2010, more companies (67 percent) now have an actual written philosophy (Figure 1). Having a written philosophy has several benefits — it establishes a bellwether against which to evaluate changes to overall programs and promotes better program communication to employees and boards.

How do your pay levels compare to market? Most organizations target base pay and total cash compensation — base plus bonuses/incentives — at the market median. Eighty-six percent of organizations target base pay at median, and 71 percent target total cash compensation at median (Figure 2, page 44). This clustering around the median strengthened during the recession.

The fact that most companies target median pay levels does not mean that is the right decision for individual organizations. Business strategy may require paying above or below market. The decision where to position pay levels should be deliberate and not left to random practice. Ongoing review and analyses of reputable salary surveys will help an organization maintain its desired position. As it’s probably more common for unchecked pay levels to fall behind the market rather than move ahead, an organization risks increased turnover, particularly among its high performers, if pay levels aren’t monitored regularly.

Most organizations strive to differentiate increases based on performance, with 70 percent of respondents indicating that increases for high performers are at least 50 percent higher than average performers, and a full quarter saying increases for top contributors are at least twice that of average contributors. This is a positive trend and one that hopefully continues, as research has demonstrated that high performers are the employees most likely to become dissatisfied when there is little differentiation in increase amounts between low, average and high performers.

Is your salary structure current with your desired market position? Eighty-five percent of organizations have formal salary structures. Fifty-five percent review their salary structures annually, with an additional 19 percent reviewing them as needed. Not all organizations adjust their structures annually, and that may be fine if salary ranges are still reflective of where they want to position salaries. However, if pay structures are not monitored and maintained, they may fall behind as market pay levels increase. Consequences include increased turnover, an inability to attract the level of talent needed and disgruntled employees bunched up near or at the top of uncompetitive salary ranges.

Are you using variable pay to reward employees? Variable pay is a major component of many organizations’ cash rewards and includes bonuses, incentive plans, profit sharing and cash recognition. It is variable because, unlike base pay, which doesn’t usually change from one period to the next, it can increase or decrease based on whatever goals or objectives are used to measure results.

Eighty-four percent of organizations use at least one form of variable pay, which has been increasingly prevalent for the past 20 years (Figure 3). Two reasons for this popularity is variable pay’s ability to focus an organization or individual on accomplishing specific goals, and the fact that the payout can increase or decrease based on the results. So if an organization has a poor year financially, for example, this is reflected in a reduced or canceled payout. 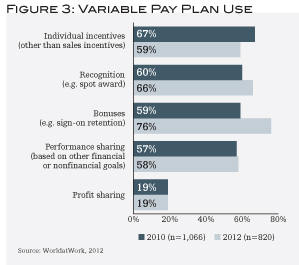 Further, these payments are singular in that after they are paid, they do not roll into base pay and must be subsequently re-earned during the next performance period. Of these types of plans, bonus programs are the most prevalent, used by 76 percent of organizations. Sign-on, retention, project completion or referral bonuses are common examples. Bonuses are even more popular today (76 percent) compared to a couple of years ago (59 percent).

The use of variable pay was historically reserved for executive-level employees but has become common for employees at all levels.

How well do you communicate your pay programs? For all the work that goes into designing and implementing pay programs, effective communication of those plans to employees continues to be elusive. Only 28 percent of respondents indicate that most or all employees understand the organization’s compensation philosophy, and this figure is a drop from a similar survey conducted two years ago. Forty-four percent indicate that most or all employees do not understand the philosophy.

These results are not surprising given that more than one-third (34 percent) of organizations indicate they share only minimal pay-related information with employees. Some 46 percent indicate they share specific design elements of their pay programs, such as the link to performance and specific competitors. The survey data shows that nearly eight in 10 (79 percent) employees have individual discussions with their supervisor regarding pay programs. In terms of communications methods, brief written or verbal communications are the most prevalent, although these methods are statistically less effective than using more detailed pay communications.

The extent to which pay program information is shared is a decision that should be carefully considered; an open book is not always the best approach. However, if companies are trying to drive behaviors with pay programs, they will be less effective if kept secret.

Talent managers should assess their organization’s compensation programs and practices, and if answers leave something to be desired, now is a good time to make repairs. They shouldn’t wait until business is booming, as there will be less time and ability to implement repairs when the chain pulling the roller coaster up
the hill is running at full speed.

Kerry Chou is senior practice leader for WorldatWork. He can be reached at editor@talentmgt.com.