U.S. companies have long been admired for being forward-thinking and consistently leading the way in adopting — if not starting — new business trends. But research network Institute for Corporate Productivity’s (i4cp) “Performance Management: A Comparison of Brazil, Russia and the U.S.” study found U.S. organizations lag in performance management prowess when compared to those in Brazil and Russia. The 2012 study of 1,427 respondents representing firms in Brazil, Russia and the U.S. examined organizational performance management practices used in those three countries and discovered vast differences.

While the study revealed a top-to-bottom approach in Brazil and Russia, it suggested a wearied distaste for performance management in the U.S., which is likely related to recent calls to abolish performance ratings as they have been used historically. For example, an article in the August issue of Vanity Fair looked at the effects of forced rankings on the culture at Microsoft. But while continuous improvement is a hallmark of U.S. success, firms should be cautious about disengaging from the current process before a new strategy is in place; performance management is critically important to organizational achievement.

An Interest in Emerging Markets
As global expansion increases, so too does interest in potential business opportunities in BRIC economies (Brazil, Russia, India and China). Brazil represents one of Latin America’s largest economies, with GDP growth predicted through 2014, according to the Economist Intelligence Unit, which projects some of Brazil’s strongest growth in the financial services and retail sectors. In Russia, healthy oil reserves and strong domestic manufacturing influence the positive economic outlook, according to the International Monetary Fund, which warns that optimism is tempered by often-heard advice for risk-aversion measures in that country.

Inclusiveness: Performance management has broad applicability. It is more than a tool designed to monitor individual employees. Creating performance expectations, goals and accountability should extend upward to all levels of the organization and broadly to cross-functional groups. Respondents in Brazil and Russia reflected this widespread application to a greater extent than those in the U.S. (Figure 1).

• About 70 percent of respondents in Brazil and Russia applied PM principles and practices to executives, while fewer than half of U.S. firms did so.
• Only 10 percent of U.S. respondents reported their organizations applied PM to their board members, while three times as many in Russia and more than four times as many in Brazil reported doing so.
• The U.S. also lagged behind Brazil and Russia in applying PM to groups of workers: business units, project teams and work teams.

Training: The conversations that take place in any PM review meeting require skills and compassion. A company that supplies its supervisors with a list of employees and an online form is missing an opportunity to help managers facilitate dialogue and improve employee performance, which leads to increased corporate performance. Just one-third or less of U.S. respondents reported their firms provided supervisors with PM training in any of the six PM topics surveyed, and they were consistently outperformed by firms in Brazil and Russia (Figure 2). 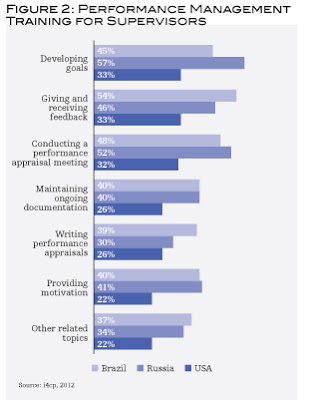 • Less than one-third (33 percent) of U.S. respondents said their companies provided supervisors with training on giving and receiving feedback, compared with 54 percent of firms in Brazil.
• Approximately half of the respondents from companies in Russia (52 percent) and Brazil (48 percent) reported their firms provided supervisors with training on conducting a performance appraisal meeting, compared with 32 percent in the U.S.

Action: Another challenging aspect of PM is addressing low performers. Whether it’s an employee wrestling with a personal issue that affects performance, an otherwise stellar employee with one glaring developmental need or a worker who needs help keeping up with new technology, people who aren’t producing to expectations need to have their performance addressed. Respondents from organizations in Brazil and Russia were more likely than those from firms in the U.S to report their companies take action to address low performers (Figure 3). The percentage of respondents from firms in Brazil (46 percent) and Russia (41 percent) reporting their companies used targeted development plans to address employees in the lowest quartile was greater than those in the U.S. (34 percent). A smaller percentage of respondents from U.S. firms reported using probationary measures, terminations or transfers to address low performers, compared with firms in Brazil and Russia. 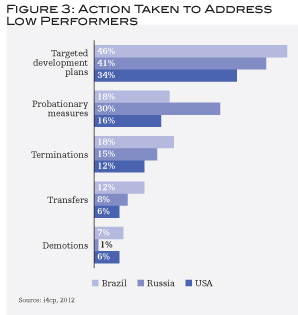 Firms that take action on low performers can realize dual payoffs. First, they can return an employee’s performance to meaningful productivity, important since they already invested in hiring and training the individual. Second, a company’s best-performing employees see that it recognizes and will deal with those who aren’t pulling their weight. By leaving low performers’ problems unaddressed, a firm could experience a negative impact on high performers’ job satisfaction, engagement, trust and retention.

Measures: How does an organization determine if its PM processes are successful? The answer may provide insight into the state of performance management in Brazil, Russia and the U.S. More than half of the respondents from organizations in Brazil and Russia pointed to individual goal accomplishment as one of their top success measures. What did the U.S. respondents consider their top measure of PM success? Performance review completion rates. After all these years, filling out the form still seems to get more attention than using the results to bring about change (Figure 4). 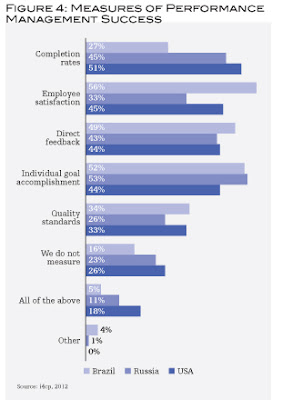 • More than half of the respondents from U.S. organizations (51 percent) said their companies measured the success of their PM process by completion rates, making that response their top measure.
• The percentage of respondents from U.S. firms selecting individual goal accomplishment as a measure of PM success (44 percent) was less than that of those from firms in either Russia (53 percent) or Brazil (52 percent).

Goal accomplishment represents an achievement to be measured, shared and celebrated. When leaders share stories about employee successes, customer accolades and organizational progress toward goals, it helps employees connect their work to the larger picture.

Focus: The pattern of passive PM in the U.S. continued in another area of the study. When asked about the top elements involved in the PM process, respondents in Brazil and Russia were more likely to choose future-focused elements such as goal-setting for the upcoming time frame and developmental plans for the next period. U.S. respondents favored the more passive responses of establishing a performance rating and review of relevant accomplishments, both of which tend to reinforce a focus on the past rather than the future (Figure 5). 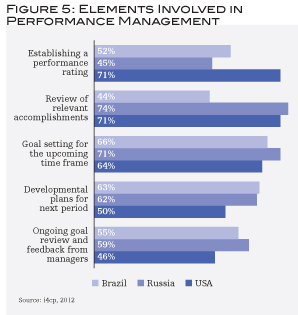 • The top two responses from participants in Brazil were proactive elements: goal setting for the upcoming time frame (66 percent) and developmental plans for the next period (63 percent).
• More than seven in 10 respondents from organizations in the U.S. (71 percent) reported that establishing a performance rating was a key element of their PM process, making that reactive selection one of the top responses.

On the maturity scale, Brazil and Russia may be just getting their feet wet in establishing formal, company-wide employee performance management processes, but organizations in these countries have adopted some of the hallmarks of solid PM programs in high-performing organizations — inclusiveness, training, action, measures and focus.

U.S. organizations, while seasoned players in the performance management space, seem to be jaded by PM processes that have become more an administrative chore than a gateway to a more strategic performance management system. As conversations about scrapping traditional PM and creating a more dynamic and continuous process become more common in leading corporations, senior leaders should ensure these five hallmarks of high-performing organizations don’t get lost in the shuffle:

• Use a broad brush and include executives as well as cross-functional teams in PM processes.
• Provide supervisors with the coaching skills needed to guide PM dialogue.
• Identify and confront PM problems to move performance in the right direction.
• Select relevant measures of PM success and keep the workforce informed of progress.
• Focus on the future with specific PM goals that link individual and corporate performance.

Worldwide, historically organizations have heeded the best and next practices that originate in the United States. These results may provide a call to action for U.S. firms eager to mobilize an integrated talent management system to improve and sustain both individual and corporate performance.

Donna Parrey is a senior research analyst at the Institute for Corporate Productivity, a member network that integrates research, peers, tools and data. She can be reached at editor@talentmgt.com.