Just because employees clock in at 9 and out at 5 doesn’t mean they’re heads down at their cubicles working. Rather, if their heads are down they may be waiting to update a Facebook status, send out a tweet or buy that marked-down blazer online.

However, eliminating access to social media altogether can be detrimental to organizations — especially as Gen Y continues to enter the workforce. According to Cisco’s 2011 World Technology Report, 56 percent of recent college graduates refuse to accept jobs that won’t grant them social media access, and two-thirds of them aren’t afraid to raise the issue at job interviews.

Yet time is precious, and every hour spent on non-work related activities impacts the bottom line. Talent Management spoke with Russ Warner — CEO of ContentWatch, makers of Internet protection software Net Nanny — to evaluate the problem and potential solutions.

What are examples of employees wasting time at work?
Some of the top time wasters include surfing the Web, making personal phone calls, standing around the water cooler talking, [around] the holiday season you’re going to see more online shopping, a lot of people spend time on Facebook or tweeting, take longer lunch breaks, there are companies that have an excessive number of meetings, some employees tend to forward emails and jokes, [play] video games, [take] smoking breaks.

A Salary.com survey revealed 64 percent of employees visit non-work related websites on a daily basis. What types of sites are employees visiting?
Social networks, Facebook and Twitter, online games, email, news portals, instant messaging or talking to friends, fantasy football, there are some who spend time looking at pornography at work, some watch videos or movies, [some use] search engines or do research that may not be work related … online shopping is prevalent throughout the year.

Is it worse during sporting events — like March Madness or the World Series — or is it a myth that productivity drops during these times? Do organizations have policies in place for this?
[According to Collegerecruiter.com] 86 percent of U.S. workers will spend at least some time at work following March Madness. If you accumulate the entire amount of time spent on an average and calculate the average wage of a private-sector job in the U.S., [the cost to employers is about $175 million] in time spent watching March Madness, so it is significant.

I haven’t seen companies that have an ad hoc policy about an event like March Madness, but I’ve seen policies that talk about social media use … either it’s prohibited or it’s allowed at lunch time or it’s allowed in 15-minute breaks.

When it comes to curbing time wasted online, is monitoring employees — putting filters or tracking devices on their computers — helpful or counterproductive?
If you suspect you’ve got an employee who’s spending all of his or her time looking at pornography, that could be a detrimental issue. You can have an issue with someone in finance who may be embezzling. There are reasons when you suspect inappropriate activity, but I don’t think tracking everyone is appropriate. If you have an employee who’s looking at pornography and a woman walks by and sees what he’s looking at, he might be creating a hostile work environment … there are legal reasons for tracking or filtering those types of cases. 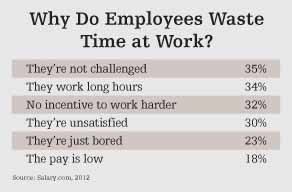 Then there have been cases of pornography sites or gambling sites, even sports websites, where hackers or malware providers are embedding malware … it can infect your computer simply by visiting a Web page. If the malware spreads to other computers in the organization, you’ve got a real IT issue.

Meetings are a sore point for many employees who claim it cuts dramatically into their productivity.

It does. If the day is full of meetings, when do you allow employees to get their work done? If you have excessive meetings, you see employees doing their email on their smartphone under the table. They’re distracted because they have so much other stuff going on, they’ve got to find a way to get it done … I have shown up at a meeting before and said: My agenda for the meeting is limited, let’s talk about critical and urgent issues and end the meeting when we’re finished talking.

What about co-workers gathering around the water cooler or their peers’ desks to chat? Is it reasonable to expect those interactions to cease?
That’s a tough one. The interaction has to occur, and people have to work with each other; they have to know about each other and like each other and sometimes that chitchat can [go from] the game to sharing insights into each other’s projects, asking questions or mentoring, so I don’t think you can eliminate that type of discussion. It’s up to the manager to pay attention to how much time is spent doing that and corralling the troops when it gets excessive.

We have a group [of computer programmers] here … I’ve noticed that because they go to lunch together, they’re pretty much heads down, headphones on, they won’t talk to each other. But then after four hours of straight coding, they need a break so they disconnect and go out to lunch and talk as much as they need to and come back with their headsets back on. You have to understand each group and cater to their individual and group needs.

What’s the root cause of wasting time at work?
Some of the problem is that employees are not challenged enough. I’ve seen employees who are challenged, who are excited, who don’t have time to waste time — they’re involved in their work, they love their work. So it’s incumbent upon the manager to make sure that employees have enough projects, enough tasks, enough skin in the game — if they do, they won’t feel the need to waste lots of time.

There are those who are fully engaged in their work, who are given incentives to do better, who are satisfied with their career, are not bored — these are all reasons why people work hard, and the converse is true. If they’re bored or unsatisfied or feel like they’re working too many hours or are not motivated enough, that’s management’s role to try to fix that.