Most are familiar with the career advice: “To achieve success, take control of your career and go after what you want.” While it is true that leaders can do a lot to develop themselves, recent research shows that personality, which is largely hard-wired, does play a role in shaping how far one ascends the leadership ladder.

According to a 2012 “Pulse on Leaders” research study by leadership consultancy PDI Ninth House, certain personality traits can mean the difference between executive-level advancement and a stalled career.

Specifically, the research examined 11,180 leaders from 1,340 companies across 147 countries to compare personality traits between levels, progressing in sequential order starting at first-level leaders and moving on to mid-level leaders, business unit leaders, senior executives and chief executive officers. PDI Ninth House gives leaders a personality inventory, which includes more than 300 questions asking them to rate the level to which they agree or disagree with various globally applicable trait descriptions. For this study, the inventory measured leaders against the norm — defined as the overall average score for each trait across all levels — and then compared the different levels with one another.

While most traits either rise or decrease steadily across the five leadership levels, an unexpected finding emerged: Certain traits that facilitate advancement to the business unit leader level inhibit progression to the CEO level. Specifically, business unit leaders scored highest in displaying competitiveness and intimidating others, and lowest in being considerate. CEOs, in contrast, scored highest in being considerate, displaying influence and taking charge, and were the least likely to be intimidating to others.

As expected, competitiveness runs high among motivated, hard-working leaders. According to the research, this is most true for business unit-level leaders, who scored highest for all levels surveyed, falling in the 58th percentile. However, senior executives and CEOs rank behind both business unit leaders and mid-level leaders in terms of competitiveness, falling in the 50th percentile. This supports the notion that if leaders are overly competitive, they risk hurting their chances for executive-level advancement. They must be able to put the organization’s interests and objectives above their own desire to win.

These findings point to one key takeaway: it is difficult to bulldoze a path to the top of an organization, and one must instead balance a results-oriented approach with working with others and considering diverse thoughts and opinions. While hard-charging leaders may find initial success, too much competitiveness and intimidation — plus a lack of consideration — may drive careers only up to a certain point; in addition to driving results, leaders must engage followers. These leaders may find themselves running into the proverbial wall, unable to advance if they don’t change their ways. They will need to rebuild relationships and regain trust if they are to attain one of the top jobs.

Instead, successful leaders are those who take the views, personalities and experiences of others into account — the factors that help comprise a diverse workplace. Recognizing and understanding difference is critical to successful career progression and growth.

What and What Not to Do
The “Pulse on Leaders” research findings provide a blueprint for the top traits successful leaders must increasingly emphasize as they progress in their careers and move up in an organization. At each successive level these traits increase in importance.

The first, influence over others, including regularly selling ideas, gaining acceptance from others, and in turn prompting them to help carry out those ideas, stands in contrast with the belief that ideas should sell themselves, and people should just “get it.”

Leaders also need high energy levels to accommodate the increased time demand between ascending levels of leadership. Leaders at higher levels typically do not need or enjoy much down time, and make use of every minute.

They also need a take-charge approach, including a more directive style of leadership that entails regularly delegating tasks and imposing action. While top-level leaders enjoy influencing, they also can be clear and direct when needed.

Optimism is also required, characterized by a positive outlook and belief that things will get better and will work out for the best, as well as interdependence, or enjoyment in working with others, rather than succeeding or failing alone.

The average CEO falls within the 68th percentile for influence, and also ranks highest when it comes to displaying high energy levels, at the 64th percentile, as well as taking charge — 66th percentile. First-level leaders score in the 42nd, 41st and 44th percentiles on these traits. The research also found that successful leaders at the top are more likely to be optimistic, and leaders with more responsibility are more likely to work interdependently, making decisions after consulting and working with others (Figure 2). This teamwork spirit played out among the most successful leaders, demonstrating that if an organization really wants to have sustainable results, those in positions of leadership must display teamwork and engagement and provide adequate support. 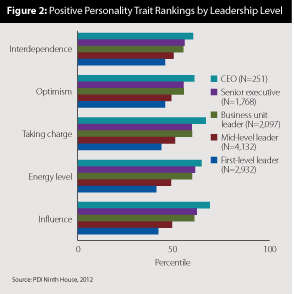 On the other hand, the following derailing traits can prove detrimental to a leader’s progress, and leaders must let them go to move up the leadership ladder (Figure 3). 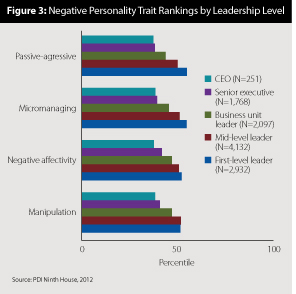 Avoid passive aggressiveness, or the tendency to avoid direct confrontation and instead express opposition in subtle, indirect ways. Instead, leaders should be direct about what they think, rather than simply aiming to avoid conflict.

Leaders should also strive to avoid manipulation, or using hidden agendas to get others to take action. Successful leaders will seek to lead by influence and will be transparent about their goals.

They should also give up attention to detail, which can prove detrimental because it detracts from the strategic oversight leaders must provide. As leaders gain a broader scope of responsibility, they should assign others to attend to — and be accountable for — the details.

Certain traits, including influence, taking charge and being direct, are applicable across all levels. However, they come easier to some people than others — underscoring the fact that regardless of level, people’s personalities are diverse. Because people bring different traits and strengths to their levels, it’s important for organizations to manage through these differences by recognizing them and encouraging and rewarding certain behaviors.

Among the key traits that depend on recognizing diversity and embracing differences is interdependence. A successful, diverse workplace features people actively listening to one another and seeking opinions. Influence, another trait prominent among successful executives, also figures in diversity. Influence requires understanding one’s audience and considering the opinions, personalities and experiences of others. These can fall into two categories: the head — logic and reason; and the heart — values and emotions. Successful leaders effectively appeal to both by understanding what most resonates with their audience and how to effectively engage them.

Overall, this research helps dispel the clich? that nice guys finish last in business, and shows that, in addition to driving results through influence and energy, collaboration with others is key to finding success at the top. Leaders cannot achieve influence over others without leveraging teamwork and compelling others to go along with an idea, rather than intimidating or micromanaging them into compliance.

Leveraging the Right Traits and Experiences
Think of today’s business environment like a sports team: If a player is overly competitive and hogs the ball, his or her team is not going to win — and the player is not going to become captain. Those who are too hard-charging and operate by intimidating others will not be trusted with the higher-level positions.

Further, effective leadership should focus on engaging others and competing externally instead of within a team. For example, instead of being rewarded for how a department or unit does, leaders can encourage others to focus on how the organization does as a whole, and reward the traits that contribute to organizational success accordingly. Mixing teams and creating cross-functional groups are among the ways to minimize internal competition and help encourage more positive traits and behaviors so the focus is on collaborating, not just competing.

It’s up to leaders to understand what is involved at each leadership level so they can navigate transitions from one level to another, and a critical component is recognizing others’ personalities. It also behooves organizations to appropriately develop leaders to prepare for these transitions and to acknowledge these personality differences. Although personalities are largely unalterable, behaviors are changeable, and aspiring leaders can leverage their strengths in line with expectations and leadership demands.

Leaders looking to advance should seek out development and stretch assignments that will provide opportunities to gain skills and practice the traits needed in more advanced roles — particularly leading through influence and delegating accountability. By understanding what is involved at each leadership level, leaders can more effectively navigate transitions from one level to another.

Joy Hazucha is senior vice president of leadership research and analytics for PDI Ninth House, a global leadership consultancy. She can be reached at editor@diversity-executive.com.