It’s not uncommon to hear people say they hate their job but the pay or benefits are too good to pass up. These days especially, people want to make sure they are taking care of themselves and their families. When confronted with this idea, the first inclination may be to wonder whether it’s worth it for that person to work there, but another important question is whether it is worth it for the organization to provide such high compensation and benefits for people who wouldn’t otherwise want to be there.

Successful employers know that learning from employee feedback and aligning the results to business goals will provide the company with a competitive advantage. And while employees may report being satisfied in their jobs, it doesn’t necessarily mean they are actively engaged in building or sustaining the performance and quality of their work.

Engagement Levels in the Public Sector
Modern Survey categorizes worker engagement into distinct levels based on their responses to five index questions. They can be: disengaged, underengaged, moderately engaged or fully engaged. According to the spring report, nearly 80 percent of government union workers are underengaged or disengaged, compared with 64 percent and 66 percent of government non-union and non-government workers respectively. Overall, government employees are only slightly less engaged than their private-sector counterparts, yet the difference between the engagement levels of unionized government workers and the rest of the workforce is significant.

The five components of Modern Survey’s employee engagement index illustrate what accounts for these differences in engagement levels (Figure 1). Unionized government workers responded less favorably than non-unionized government and non-government groups on four of the five questions.
Government union employees are less inspired, have less pride, are less willing to recommend their organization and have a bleaker view of their future in their organization.

Despite this pessimism, of the nearly 50 questions asked on the study, the intent to stay question is one of two that government union workers are significantly more likely to respond strongly agree or agree to than private-sector workers. More than 60 percent of unionized government workers intend to remain on the job for a long time, compared with non-union government workers — 59 percent — and private-sector employees — 56 percent.

These employees are choosing to stay where they are not engaged, at a job where they have a more pessimistic outlook on their position and their organization than most U.S. workers. Why? The benefits and compensation are too good to pass up (Figure 2). 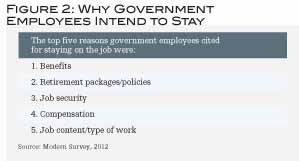 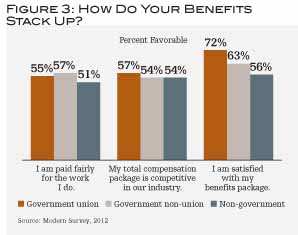 Time to Create Engagement
Benefits and compensation may help organizations attract and retain employees, but they do not move the needle in terms of engagement. During the last two years, the National Norms Study has identified belief in the future of the organization as the new top driver for employee engagement, replacing traditional top drivers such as recognition or appreciation and personal accomplishment.

Economic uncertainty has played a major role in this change in worker psychology. Employees appear especially concerned with job security and organizational solvency. With this new top driver being so critical in the current economic climate, failure to effectively communicate to employees will make engaging them difficult.

Like other employees, government workers need strong top leadership support to help improve their work experience. Although just more than half of all government workers think their direct manager does a good job and treats them fairly, senior leadership does not fare nearly as well (Figure 5). More than twice as many unionized government employees disagreed that their senior management shows a sincere interest in employee well-being than agreed. The same is true for the question of whether they have confidence in their company’s senior management. With such dramatic distrust in senior leadership, this group of employees will continue to be extremely difficult to engage.

Fix the Problem
The data from the spring 2012 study indicates that high satisfaction with compensation and benefits for unionized government employees is not paying off in terms of engagement. The benefits and compensation packages may help the government hold on to its workers, but it is not effective in motivating them. Employees who are motivated to only do what’s necessary to keep their jobs are a liability.

Fair compensation is not only a good thing, it’s often a necessary condition for full engagement. Yet it’s important to realize there is a level at which additional compensation yields no further engagement. If a talent manager pays an employee twice as much, he or she might expect the employee to be twice as motivated, but that probably won’t be the case. While a perceived inequality in compensation and benefits may hinder engagement, a higher level of satisfaction with pay and benefits won’t necessarily drive it any higher than the point at which an employee believes he or she is compensated fairly.

The good news for leaders is that exorbitant salaries and luxurious benefits packages aren’t necessary to create a workforce full of highly engaged employees. The bad news for the government is that this is the one area of employee engagement it seems to be succeeding in. Leaders, governmental and private sector, ought to examine this system, which focuses more on payouts than the management practices that actually motivate employees to contribute to organizational success. Measuring engagement levels and undergoing key driver analysis to determine what will do the most to create and improve engagement is a good start. But the real payoff will be determined by how well leaders follow up on findings.

In some cases, it will make sense to conduct follow-up measurement, which could include pulse surveys or more personal opportunities such as focus groups conducted by a trained consultant. Focus groups, in particular, can provide an excellent opportunity to reach out and get employees invested in their own engagement, as they can be used to gather suggestions from employees.

Direct managers who have more personal interaction with employees can focus their efforts more on the individuals they manage. They can boost employees’ sense that their work is recognized and appreciated by providing specific, timely and honest positive feedback. Further, they can help employees hold themselves accountable by establishing expectations at the outset for effort and motivation.

As a bonus, these types of activities for senior leaders and direct managers will not only produce more engagement, but they also won’t cost any extra money. As Modern Survey’s study data shows, throwing money at dysfunction in employee engagement won’t fix the problem anyway.

Don MacPherson is president and co-founder of Modern Survey, a human capital measurement company. He can be reached at editor@talentmgt.com.