Managing complex, cross-boundary relationships and initiatives in a matrix organization takes a different set of skills than leading in a traditional hierarchical system. Hay Group’s 2012 “Effectively Leading in the Matrix” research — based on interviews with matrix leaders — indicates that soft leadership skills such as empathy, conflict management, influence and self-awareness are critical to success in matrix organizations.

A subsequent analysis of Hay Group’s Emotional and Social Competency Inventory (ESCI), a behavioral database containing emotional intelligence data on more than 18,000 individuals worldwide, showed these skills are in relatively short supply (Figure 1). As the prevalence of matrix leadership roles accelerates, many executives are likely to find themselves in these types of positions, if they haven’t already experienced one. Leaders often find matrix roles extremely challenging and frustrating because they need to influence and mobilize resources they do not own. Being ill-prepared for these roles can impact a leader’s ability to deliver results and can be potentially career derailing.

When the ESCI data was sliced according to gender, sharp differences emerged between male and female leaders. In all cases, the leadership competencies most important for success in the matrix turned out to be more prevalent among executive-level women than among their male peers, according to the aforementioned matrix study (Figure 2). 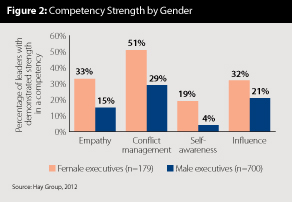 ESCI data on competency prevalence does not come from executives self-reporting their own strengths but from 360-degree assessments that combine the perspectives of between five and 15 assessors who independently evaluated the competencies of the leader in question. By combining and averaging the assessments of multiple raters, the assessment minimizes the effect of subjective biases to create a more objective picture of an individual’s leadership competencies.

Stronger Filters, Stronger Competencies
Females may possess stronger matrix-related competencies than their male counterparts due to stronger filters that statistical evidence shows women must overcome in their quest to achieve senior executive posts.

Data from nonprofit research and advocacy organization Catalyst’s “U.S. Women in Business” 2012 report shows women in the United States comprise nearly half — 46.6 percent — of the labor force and make up more than half — 51.4 percent — of the managerial and professional ranks. Yet, when it comes to senior-level executive positions, women hold only 14.1 percent of executive officer positions, 16.1 percent of board seats and 3.4 percent of the CEO slots at Fortune 500 companies. In the 2012 Hay Group analysis, women comprised 20 percent of the executive general managers in the ESCI database — 179 women out of 879 general managers.

If women do face more stringent filters than men in their rise through the executive ranks, then it follows that they would need to outperform their male peers on all sorts of competencies, including the matrix-related ones measured in the ESCI survey. In other words, it may not be that women are naturally more empathetic or more self-aware than their male counterparts; they may have had to be to advance.

The same analysis of the ESCI database showed that gender-based disparities for matrix leadership competencies are far less pronounced at the early management level. This suggests that leadership career path filters must be selecting women who excel at matrix-related competencies. 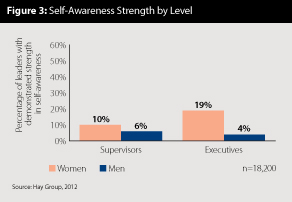 The selection process appears to work differently for men. They seem to lose ground on the softest competencies — self-awareness and empathy — at higher organizational levels (Figures 3 and 4). Or perhaps they rely more heavily on the traditional leadership methods as they move up the ladder. As matrix roles become more prevalent, it benefits organizations to take a closer look at female high-potential and executive populations. While the ESCI database did not have complete information on race or ethnicity to run similar analyses, it is hypothesized that minority executives may show a similar pattern, due to similar selection filters. 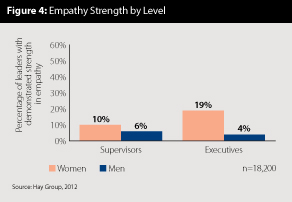 A Hay Group study conducted for a global technology company in 2006 on the factors that enhance diverse leaders’ promotions reinforced the idea that minorities who face more obstacles in climbing the managerial ladder end up with stronger matrix leadership skills. The study showed that Hispanic, African-American, Native American, LGBT and female executives were all more likely than their white heterosexual male counterparts to possess the vital competencies for leading in a matrix.

Women in the Matrix
All of this data suggests that the women and other minorities who overcome more challenges to rise into senior leadership positions are more likely than their peers to become more self-aware, more empathetic and to develop influence skills that will serve them well in the matrix operating environment.

Consider the anecdote shared by one female executive who was the only woman on a team of senior leaders. After leaving a meeting thinking that a joint decision had been reached, she later found that her colleagues had subsequently reached an entirely different conclusion. “Did they all go into the men’s room and change their decision there?” she said.

Being a minority in this type of situation and feeling like an outsider can help female and minority leaders build their sense of identity — self-awareness — and also give them a greater ability to empathize with others.

However, even in a matrix some traditional leadership skills still play an important role. Leaders in matrix and traditional hierarchical organizations alike need to think analytically and hold people accountable, but there is less evidence of gender-based discrepancies in these leadership competencies.

Separate, independent, assertive ideas of power expressed by men may have been effective in the old hierarchical organizational structures, but will prove problematic in a matrix organization where leaders may have little formal authority over their teams and have to rely more on trust, persuasion and inspiration to achieve results.

As more and more companies embrace matrix organizational principles, it is essential that they also find ways to identify and cultivate leaders with the competencies needed to achieve results in a matrix environment.

Hay Group’s research has shown empathy, conflict management, influence and self-awareness are four of the most essential competencies that are predictive of leadership success in the matrix. Yet not only are these competencies in short supply among matrix leaders, in some cases organizations seem to select against them. The ESCI database indicated the self-awareness competency is higher in male middle managers than among men who make it into the senior leadership ranks (Figure 3).

No matter what approach they take to remedy the problem, the most important thing is for companies to recognize the need for continued leadership development, especially in executive ranks, to enable leaders to manage themselves and others more effectively in the new landscape. In pursuit of this goal, companies can have the greatest impact by looking for ways to build matrix-related competencies into the early career development for their next-generation managers.

Ruth Malloy is global managing director for leadership and talent, and Signe Spencer is a global leader for capability assessment at management consulting firm Hay Group. They can be reached at editor@diversity-executive.com.