Talent mobility figures prominently in any contemporary discussion on global economic and social trends. Indeed, greater talent mobility can help address talent shortages and close skills gaps. Its impact can be seen in a growing number of activities across the economic spectrum, touching individuals, organizations, even entire countries and regions. Many of these changes are unprecedented. All have the potential to fuel economic performance while enhancing workers’ lives.

In today’s global context, talent mobility is nothing less than the physical movement of workers within or across organizations, industries or countries, or the professional movement of workers across occupations or skill sets. Mobility may be temporary or permanent and may also involve moving people from unemployed to employed, moving jobs to people or allowing for virtual mobility.

Consulting company Mercer and the World Economic Forum (WEF) collaborated on a report early this year, “Talent Mobility Good Practices: Collaboration at the Core of Driving Economic Growth.” Questionnaires were sent to practitioners and experts in 45 countries, capturing more than 200 practices in multiple dimensions of talent mobility, supplemented with interviews and research to gain clarity.

Collaboration for Job Creation
Mercer and WEF research revealed that collaboration in talent mobility among stakeholders on all sides of the employment equation is most effective in addressing labor market failures and job creation.

Yet the research also showed that most private organizations’ mobility efforts remain anchored to narrow concerns around expatriate assignments and leadership development. At the same time, public sector actions often reflect parochial interests rather than a spirit of collaboration in the service of a greater good. As evidence of the gaps between talent mobility aspirations and actual practices, the report found that:

• Three-quarters of the organizations surveyed classified their talent mobility practice as traditional leadership development programs.
• Mobility practices target executives, managers and professional/technical employees. More than 40 percent of the organizations surveyed move 5 percent or fewer of their employees each year, and 65 percent move 10 percent or fewer.
• Fewer than half of the organizations surveyed are moving people across jobs and occupations.
• Fewer than half of companies surveyed said they selected international assignees well; 62 percent said poor candidate selection was the second most important cause of assignment failure.
• The European Commission reports that six European Union (EU) member states failed to implement an EU scheme that would make it easier for highly skilled people to come to the EU for work.
• The number of employment-based, permanent-residence visas issued in the United States has not changed since 1996, resulting in a wait of more than a decade for these visas.

The result is often a continuing, frustrating paradox. Many countries struggle with vast unemployment, underemployment and untapped labor pools beyond what can be attributed to the global economic slump. Yet many industries struggle with talent shortages and skills gaps that are dampening economic growth. Talent mobility aspirations are outpacing what is being done about this.

To a large extent, progress on achieving greater talent mobility has been tempered by the complexity of foundational labor market issues (Figure 1). Effectively addressing these issues often requires collaboration across multiple stakeholders.

Wal-Mart in Two Worlds
Of the 200 good practices captured by the study, 50 were selected for publication in the report and five in-depth case studies were analyzed for their impact on economic growth. One of these case studies involves the world’s largest retailer, Wal-Mart Stores Inc., which has created partnerships with government, educational institutions and non-governmental organizations to develop and source talent to support its growth ambitions in emerging markets.

Preparing for massive growth in India, Walmart entered the Indian market in 2009, establishing seven stores during the past three years. With a workforce of 8,000, the company’s Indian joint venture, Bharti Walmart, expects to mushroom to 60,000 associates during the next five years.

Bharti Walmart’s new positions should be easy to fill. After all, India has the largest youth population in the world, according to the United Nations, with close to 200 million people between ages 15 and 24. Yet significant skill deficits among this population affect many individuals’ employment prospects.

“Although India has had massive growth, there is another India composed of many young people in semi-rural towns who do not have much education or high qualifications but are in need of jobs,” said Arti Singh, senior vice president of corporate affairs at Bharti Walmart. “So, one of the items on the government’s agenda is to promote inclusive growth — to bring the part of India that isn’t well-qualified into the workforce.”

Then there is Walmart in Brazil, where accelerated growth during the past decade has created a large demand for talent in the retail sector. In 2010 alone, nearly 2.5 million formal positions were created. As Brazil’s third-largest retailer, with 87,000 employees, Walmart added 10,000 jobs last year and expects to add another 10,000 in 2011. Given Brazil’s large pool of young adults — 18 percent of whom are unemployed — it would seem the talent exists to fill these new jobs. But, according to Paulo Mindlin, director for corporate social responsibility and Walmart Institute at Walmart Brazil, “Many of our young adults lack the education, work skills and professional, personal and social development to access the labor market.”

In both cases, Walmart’s strategy was to increase the pool of qualified talent. Thus, before opening its first store in India in 2009, Bharti Walmart began discussions with the chief minister of the state of Punjab about partnering to train young people for jobs in retail. The state was willing to prepare a larger cross-section of its young people for productive careers in the growing retail sector. At the same time, Bharti Walmart wanted to help develop a pipeline of talent ready to step into positions in retail.

Meanwhile, in 2010, Walmart Brazil launched Escola Social do Varejo (Social Retail School) to teach high school students the behavioral and technical skills they need to become employable in the retail sector. Offering a program similar to the one in India, the school accepts young adults from low-income families.

During the past three years, approximately 8,000 students have been certified through Bharti Walmart training centers, nearly 2,900 have been placed in formal jobs, including almost 500 in Walmart stores (Figure 2). On the other side of the world, Walmart Brazil’s Escola Social do Varejo trained approximately 1,000 young people in its first year, 83 percent of whom have been placed in jobs and 45 percent joined Walmart. Another 1,740 students participated in the program in 2011. 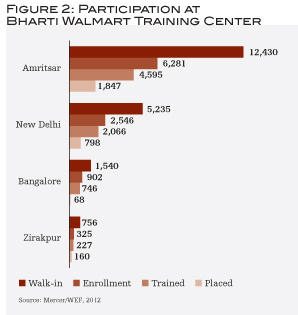 Ambitious Expansion Plans
During the next five years, both programs expect to expand, moving into new regions and training approximately 10,000 additional students each so they are equipped to enter the retail sector, a goal that will require new partnerships with state governments and others. Although Walmart is still in the process of designing a system to assess the impact of the training on both attrition rates and store profitability, supervisors of program graduates in Walmart Brazil report that these employees are more committed to their work.

“Some store leaders have told us, ‘If I had only students from the Social Retail School, I could double productivity in my store,’” Mindlin said. “They clearly want to hire these professionals.”
“The impact on our operations in India has been tremendous,” Singh said. “Not only has it helped us fulfill our hiring requirements, but it has also gained us a lot of goodwill in the states in which we work.”

Walmart’s multi-stakeholder approach to sourcing and developing talent has advantages over a unilateral approach. Rather than simply competing with other employers in the sector for workers who already have the skills they need — thereby pushing up labor costs for all retailers — or bearing all the costs of recruiting and training talent on its own, Walmart is helping to increase the overall supply of skilled talent in the market.

The programs also face challenges, such as absorbing all graduates into the job market at the same time, and small costs can impact participation — the cost of bus transportation can make the difference between a student making it to the program or not.

In bringing together the multiple stakeholders concerned with workforce employability, Walmart has launched programs in Brazil and India that successfully address two foundational talent issues — unemployability and skills gaps — to meet both its own talent needs and the very specific needs of students in these two different regions.

For talent managers in today’s increasingly global context, driving talent mobility by embracing and enhancing levels of collaboration is an important strategy to make sure the right workers are in the right place at the right time — helping to ensure a competitive present and sustainable future.