Human resources and finance have a history of not approaching business challenges from the same perspective, but times have changed. A 2011 survey by Robert Half Management Resources, a staffing firm, asked 1,400 CFOs what areas outside of traditional finance responsibilities they are most involved in. Human resources ranked second only to operations.

With the shift from a manufacturing to ideas-based economy, talent now appears more steadily and as larger sums on the balance sheet. In 2008, Deloitte called the workforce “one of the single largest expense items in the profit and loss statement, even before you consider all the corporate resources that support it,” and projected between 40 and 70 percent of most companies’ operating expenses go toward meeting compensation, benefits and other employee-related expenses.

As developed economies continue to move away from the production of goods and rely more on the production of ideas, the cost of labor continues to grow, making total employee compensation among most companies’ largest expense. This is especially true as companies seek to attract top talent through competitive salary offerings and benefits.

From a CFO’s perspective, profitability is the goal, and that can’t be achieved without a workforce operating at full productivity, retaining its customer base and supporting company growth projections.

In 2008, during the height of the recession, the cost of labor was top of mind for CFOs around the globe; it was listed as the second largest concern in Duke University and CFO Magazine’s Global Business Outlook Survey. In the United States, it was second only to consumer demand on the list of concerns (Figure 1) and was No. 1 in Europe and Asia.

According to the Robert Half Management Resources survey report, “Financial Executives Extend Their Reach into Operations, HR,” that concern hasn’t subsided three years later. The survey, released in August, interviewed 1,400 CFOs from a random sample of U.S. companies, asking what areas senior finance professionals find themselves spending more time in. Twenty-seven percent said they have become more involved in company operations during the past three years (Figure 2). Human resources was the second most common area of expanded responsibility, cited by nearly 20 percent of respondents, which points to a number of implications including little change in the need for traditional business justifications when it comes to spending. Moving forward, this will require talent managers and the CFOs to expand their traditional skill sets to work more collaboratively and for HR to increase analytics related to financials. 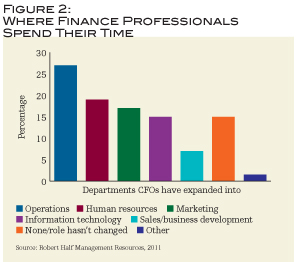 Only 12 percent of companies claim to have complete alignment between their strategic talent management goals and their organization’s overall business objectives, according to ADP’s “Talent Management 2011: Perceptions and Realities” research. But companies increasingly see the value in such alignment. In recent years, HR not only has been reporting to the CFO, it’s been working alongside finance.

As people-related costs continue to maintain their spot on the balance sheet, and as a point of worry, CFOs likely will continue to be interested in HR functions and programs. To prove alignment of those initiatives to larger business objectives, the following are quantitative steps HR can take, including metrics and data-driven communication.

Shared interest: While companies have multiple forms of capital, CFOs are primarily concerned with the financial kind. Yet, as ideas, creativity and talent largely define a company’s long-term success, it has become increasingly difficult to separate human capital from financial capital.

Long thought of as a silo for dealing with workforce administration, employee scorecards and touchy-feely engagement issues, historically HR has operated on its own in the back room. However, the CFOs’ recent interest and involvement in HR speaks to the integral role its core functions play in a company’s success and profitability.

This is a result of increasing workforce-related costs and HR’s increased ability to act as a strategic decision maker. CFOs list staff morale and motivation after health care costs, controlling spending and improving profitability as top concerns, according to the 2011 Robert Half report, “CFO Concerns.” CFOs’ renewed focus on talent management has opened doors for HR to spend time in multiple business departments and win face time with executive leaders.

Working together on initiatives such as merit pay attached to performance, flexible staffing or increasing employees’ contributions to premiums to maintain health care plans, HR and CFOs are collaborating to increase profitability. The best company results will come out of joint efforts to control costs and make investments that take employee relations and productivity into account.

Making the case with metrics: CFOs not only require workforce reductions when business units cut back on expenses, they also help determine how to invest in technology and other resources. With their influence and control in spending, HR professionals seeking budgets for recruitment, retention, training and automated technologies will benefit from such financial partners.

As the gatekeepers of today’s most competitive advantage — talent — HR knows companies need to understand and invest to attract the best candidates, retain key players and develop the workforce for increased productivity and performance. But most companies are not yet fully recovered from the recession; they are still wary of an artificial improvement in the economy and are slow to spend. A close relationship with the CFO, the gatekeeper of a company’s purse strings, is a chance for HR to rally support for its talent and technology investments.

Building the case is a matter of proving the tangible results that a strong talent management strategy and people-centric philosophy can bring to an organization’s bottom line. It is about data-orientation, metrics, forecasting and speaking the company-wide cost and return language.

The big drain: Both HR and CFOs want to reach a point where headcount is efficiently meeting need or growth, and integration is key. The cost of an employee needs to be an investment that contributes to this goal, rather than spending with no return. CFOs know they have to care about the people-related costs lost through turnover and disengagement, which makes programs that clearly reduce turnover an easy sell.

According to a survey conducted in December 2010 by workforce consultant Right Management, turnover is on an upward trend. In North America, 59 percent of recruiters, hiring managers and HR executives expect higher turnover in the next five years, and 49 percent of global recruiting professionals agree. With related expenses projected to add up to as much as 200 percent of an employee’s salary, this is HR’s point of entrance.

In its 2010 Global Workforce study, consultant Towers Watson found 9 percent of disengaged employees have no plans to leave their organization. Compared to the 43 percent of engaged employees who don’t intend to jump ship, it makes a strong case for HR’s efforts, from enhancing employee benefits to company culture. By retaining employees rather than wasting resources on the costs and time lapse between hire and full productivity for new workers, companies can more readily meet larger goals and HR can focus on performance and greater ROI on talent investments.

The hard sell: Everything from having the wrong people in the wrong seat to increasing vacation or budgeting money for a fancy career portal can be of interest to the CFO, and they are when delivered in terms of maximizing profit and optimizing assets. However, CFOs want to talk metrics and costs for keeping these operations lean and for long-term talent investments such as succession planning and leadership training. It’s more challenging to sell the programs and services that ultimately make the company a nicer place to work to the CFO.

The softer side of HR — engagement and culture — can be addressed collaboratively when it maps back to reach corporate and financial objectives. CFOs need to see the return on investment.

In Cornell Center for Advanced Human Resource Studies’ 2011 Chief Human Resources Officer (CHRO) Survey, 200 CHROs shared the metrics they use to assess their effectiveness (Figure 3). Many of these areas, especially internal customer surveys, recruiting efficiency and turnover, are of interest to the CFO when data trends and solutions are extracted. These metrics will help support the HR agenda as it moves through the CFO’s decision-making analysis. 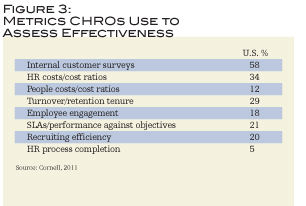 With 58 percent of U.S. CHROs benchmarking against internal customer surveys, asking the right questions and pulling critical trends to build a case for soft dollar spending, recruiting and buy-in for initiatives is key to the CFO relationship.

Insights ranging from how colleagues and departments view HR success to employee sentiment and engagement can help build the case for the things that contribute to culture and employee satisfaction. Mapping these back to recruiting and turnover costs can result in savings, which is well aligned to top CFO concerns.

The two functions see the value in HR’s longstanding areas of concern such as engagement, culture and employee relationships. Using HR to maximize productivity, increase retention and find cost savings is an important dialogue and can only be done when the two roles better understand one another’s pressures, goals and perspectives. Human resources is, after all, an enabler of people — the most important asset and source of capital a company has.